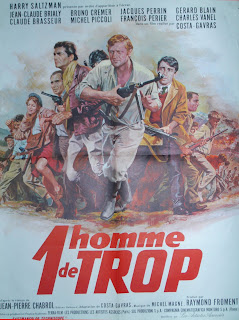 Contrary to his Eon / Danjaq partner , co-producer Harry Saltzman sometimes veered off the Bond canon towards other type of movies .

Such as this ' One Man Too Many ' ( word-for-word translation of the original French title ) which seems to be some kind of mix between the Dirty Dozen and...Unglorious Basterds !

Synopsis tells us this : in 1943 , a group of resistants managed to save twelve prisonners from death penalty . Problem : once they think they're safe at last they realized there's...One man too many amongst the group .

Released in 1967 and directed by no less than a young Costa Gavras , film boats an impressive line-up and is co-produced by Les Artistes Assoçiés ( french counterpart of United Artists ) , Sol Produzioni ( Italy ) and Compania Cinematographica Montoro ( Italy ) .