Everything that glitters is not gold 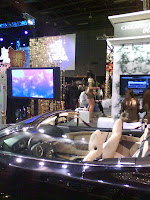 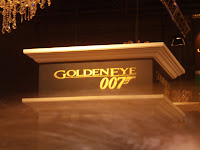 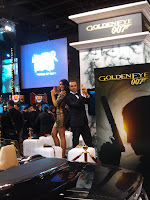 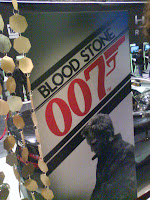 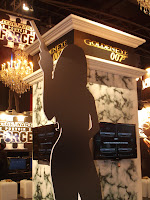 Readers of this blog already know my ( unbiased ) opinion about the new ' re-invention ' of the vintage Rare ' GoldenEye ' game - based on the Pierce Brosnan 1995 debut movie .
I just tested the new Activision game at the Paris 2010 Game Show ...
Activision had done things well : the GE stand was virtually the first stand the visitor will stumble upon when entering the huuuuge place .
A platform has been erected with multi-screens , allowing people to test various levels of the game .
An Aston-Martin DBS was parked besides it , and various glamourous hostesses were ' at hand ' if any male 007 afficionado looks a bit perplexed ...
The girls were all dressed in gold lamé dresses , and for a moment I thought I was transported back in time at the Premiere of ' Goldfinger ' ...
As for the game itself , well, I played a classic ' shoot your opponent ' dual screen level .
Nothing new there ( as usual , it took me some time to adapt to the split screen, allowing my adversary to blast me to smithereens in ten seconds the first time we played... ) .
That level was FPS-like , so the perspective of playing Daniel Craig playing Pierce Brosnan playing 007 wasn't too harsh to deal with ...

But it still remains nevertheless the main point of my angst : why, o why remaking a classic game ( and a classic film - to some extent ) and changing the lead with the current actor / incarnation of James Bond ?
A bright idea from the Activision Consumer dpt . , surely thinking potential buyers of the game won't remember an old movie from 1995 - and will associate only agent 007 with Daniel Craig ?
It feels somehow...awkward to see Craig performing ( re-acting ? ) Pierce's moves , and delivering his lines ( the actor dubbed himself for that game ) .
Perhaps to tone down that bizarre impression of deja vu , screen - and videogame - writer Bruce Fernstein changed some locations during the course of the story : for instance , the Tiger Helicopter theft in Monte-Carlo is replaced by a similar plot devise set in Dubaï...
As for the level I tested , nothing new under the sun I must say ...
I would have liked much more to be able to test Blood Stone , but this later title seems to be purposely ' toned down ' by Activision in favor of the GE one : only the opening credits sequence was screened on some monitors , and there was only one panel decorated with the title cum Daniel Craig pose...
My verdict is still dangerously low regarding the newest Activision efforts .
I will perhaps change my mind regarding Blood Stone when I'll get a complete preview version, but I'm pretty sure GE won't get my approval even if it turns out to be one of the very best game of all time ( which I greatly doubt ) ...
Publié par Kevin Collette Aucun commentaire:

Book of the Century : George Lazenby's autobiography to be published !

Great news forwarded to me from the 2010 Frankfurt Book Fair via movie critic mastermind Tony Crawley : the autobiography of George Lazenby, the man who had the unenviable task of inheriting James Bond’s shoes after Sean Connery, has been taken off the table by Century.
John Elek of AP Watt sold the book by Lazenby, who was working as a car salesman and model before playing 007 in On Her Majesty’s Secret Service.
Tentatively titled "The Other Fella", the book will be released by Century Publishing House in spring 2012.
At least , the man himself will put to rest all the rumours still surrounding the shooting of that film ( Dame Diana Rigg herself refused to answer my questions about it some years ago ... ) .
OHMSS remains the best of the non-Connery Bonds - if not the best of the entire series of films produced so far by Eon Productions .
Although it doesn’t have the so-so realistic approach of the most recent films , but stick instead to the original Ian Fleming novel ( thanks to Richard Maibaum's fantastic script ) , the 6th James Bond film can in all honesty still be descrided as nothing short of a masterpiece .
Many thanks to Tony Crawley
Publié par Kevin Collette 2 commentaires: