Ok , no new film on the horizon but two new ' virtual adventures ' lined up for the end of the year ...

On a personnal level , I just find the idea of using the title of a Pierce Brosnan movie for a Daniel Craig game version totally...Hideous , but I can easily understand the marketing behind that unholy decision.

Find it rather tedious though to hear exactly the very same orchestration of the James Bond Theme both for the Blood Stone AND Goldeneye wii games - the one used by Eon to introduce viewers to Daniel Craig's 007 in Casino Royale in the official movie trailer that is .

Is it an obligation from Danjaq , or merely a cruel lack of inspiration from both Bizarre creation and Eurocom ( developpping the new Goldeneye instalment for Activision ), I wonder ?

Come on people : watch again the inspired teaser trailers from the classic movies ( ' This man has a Licence To Kill . It means he can kill whom he chooses , where he chooses , when he chooses ' ...) and come up with something a little more original...

" For Your Wii Only "
Publié par Kevin Collette Aucun commentaire:

Tales from the Crypt 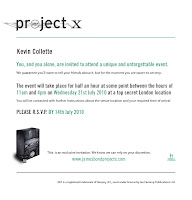 Location of the event was the gothic Hammer-like crypt under St Andrew church in Holborn, London .

A place which would have seem more suitable for a meeting with, say, J.K Rowlinds or Dacre Stocker... Very cloak and dagger atmosphere.

Lucky attendees were introduced one by one to Mr Deaver, and then disposed of twenty minutes each to ask their questions to the writer .

No press kit was made available at the time as a reminder of the meeting .

Activision has finally announced its new James Bond game, helmed by Project Gotham Racing and Blur developer Bizarre Creations. Featuring an original story by Bruce Feirstein (who penned the screenplay for GoldenEye , worked on revisions on both T.N.D and Twine , and created the script for 2003's Bond game, Everything or Nothing), James Bond 007: Blood Stone features a mix of third-person cover-based shooting, hand-to-hand combat and "adrenaline-fuelled driving sequences" on land , sea -- and air , with various nods to past movie Bonds stunt sequences.

Judging from its visually inspired credits sequence , very reminiscent of the Casino Royale and Die Another Day ones , the script of the game - and its title - seems to refer to those famous ' conflict diamonds ' hinted at during 007's 20th cinematographic mission...

The game was officially introduced to the World Press on wenesday, July the 14th , Activision held the "Bond Event 2010" at the One Marylebone conference venue in central London, parking an Aston Martin outside the doors to let invited guests know they were at the right place ( what else is new , then ) . 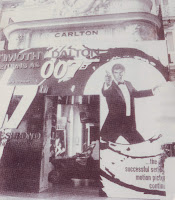 In a tragic case of History repeating , the Bond 23 production future is beginning to look more and more like the ill fated Bond 17 one...
Various sources quoted the Eon crew - which was supposedly working on the pre-production of the movie before the official April announcement of the delay due to the MGM financial troubles , had been now told that the film was ' officially canned ' .

The situation now seems to mirror the way the third Timothy Dalton movie - advertised at the 1990 Cannes Film Festival under the code name ' Bond 17 ' - is repeating itself .

Another nail in the coffin of the ill fated Bond 23 production is the fact that strictly no annoucements , news or Press release regarding the mere status of the movie have been made during the whole latest 63rd Cannes International Film Festival . Not a whimp, not even gossips . Utter ( and defeaning ) silence...

It should be noted however that no official Press statement has been yet issued so far by Eon, MGM or Sony to confirm the definitive halt regarding production of this third Daniel Craig 007 movie.

Pics property of Media Bis - Do not use or reproduce . © 2010
Publié par Kevin Collette Aucun commentaire: