A James Bond TV series ? Cubby Broccoli raised the prospect back in 79'. 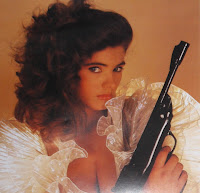 London, June 1979.
The UK opening of Moonraker was the last time I chatted with Cubby Broccoli. Full of his usual affability. “I’ve done the farming. I’ve raised the broccolis, now I’m raising the Bonds.” Not tired of him yet? “Never!” he roared. “It’s a very exciting venture and when you work with friends - Derek Meddings, Ken Adams, Bob Simmons - and this pretty young lady [Corinne Clery was sitting between us], it inspires you to keep making more. So does finding new, exciting people like Michael Lonsdale, the best villain since Goldfinger... I like Rog but he’s not contracted. He works from picture to picture... Yes, we have rights for a Bond TV series, but I don’t see us making TV at this stage.
Why not keep making the films? I hope I play the most important part of doing that, as the one that sits there, making the decisions, working (I hope) as a creative producer, writer and ideas man. For example, Jaws was my creation. I’d met Richard in America and told the boys to write an idea for him. We write the impossible and we shoot the impossible... I have to make the ultimate decisions (I have the bills to prove it) so if there’s a mistake I like it to be my mistake and not somebody else’s... We’ll survive only if we make good films. If we make lousy films, we’ll go down the drain like everybody else.”
Tony Crawley
[Every 007 film has a page on Tony’s website, crawleyscasting calls.com]
Publié par Kevin Collette