How to raise the tension while posing for a damn lucky Film critic ... 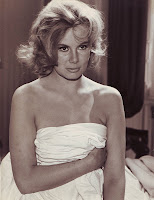 She got the sticky end of the lollipop, did Mollie Peters - the first nude Bond Girl (in Thunderball). She was the only one of the four girls to miss out on the sunny locations of Bahamas where the global media was. She stayed home, wed to a London copper. Good. She was available when photographer pal Marc Sharratt and I wanted her for a beauty layout in Showtime magazine. We booked a room at the Skyway Hotel at London Airport (why so far out of town I’ve no idea). We arrived, set up camera and lights. Mollie arrived and took off all her clothes and said: “Where do you want me?” Silence. A long silence. We recovered and I started directing her, seated at the dressing table, brushing her flaxen hair. Bingo! All over in 40 minutes.
Imagine trying that today with six producers, five publicists, two agents, a two make-up team, three coiffeurs... and months of e-mails.
Took me one phone call and one delightful lady.
Yeah, yeah, it’s Molly in the credits, but she always told me ’twas Mollie. And that’s how I remember her. Not as 007’s “physical”-therapist Patricia Fearing - but brushing her hair at the Skyway Hotel.
It’s a toss-up about which became the major (or kinky) fashion statement of Thunderball - Claudine Auger’s swimsuit. Or The Glove - a mink affair, used by masseuse Mollie Peters at the Schrublands health farm. And, yes, indeedy, used by Sean upon Miss Peters - “it reduces tension” - minutes before she cut herself a slice of history as the first Bond Babe to be seen nude in the franchise albeit through a steamed-up glass wall of a shower.
Mollie, who missed all the fun (and publicity) of shooting in the Bahamas, won the role of Patricia Fearing after tough opposition from Uschi Bernelle, Elizabeth Counsell and Justine Lord.
Justine went on to make six chapters of The Saint with a chap called Moore. Elizabeth had been seen - just! - in From Russia With Love. Or, at least, one of her knees was seen as Woman In Punt gliding by with actor Michael Culver... while Bond was on the river bank with, bien sur, another girl.