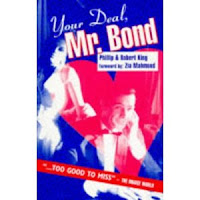 Here's a selection of rarely seen ( some would say ' almost mythical ' ) titles linked to the agent with a Licence to Kill ...

First , the 1967 pastiche ' Holmes Meets 007 ' - written by journalist Donald Stanley in 1964 . In which the 221b Baker Street duo encounters James Bond and M in very unusual circumstances ... Two limited series of the book were produced , running from number 1 to 221 (b , of course ) plus 25 additional copies for friends & family ( numbered I to XXV ) .
Then we have the strange case of the supposedly real Glidrose approved novel ' The Killing Zone ' - which finally turns out to be everything but official !
The Killing Zone relates the story of 007 going after a drug lord in Mexico after his friend and colleague, Bill Tanner, is murdered by said Villain ( plot looking suspiciously like the 16th James Bond film , Licence To Kill , released four years later ) . Book is known about the Fan communauty mainly for its shocking ending , with the funeral at sea of Commander Bond ( in grand You Only Live Twice - filmwise , tradition . ) .
Initially published ( or so it seems ) in 1985 , the precise year no new John Gardner official 007 novel appears on the market , it finally turned out to be nothing but a fraud from a so-called Thriller writer ( actually an ex convict ) apparently badly in need of some publicity ...
More recently - in 1997 - surfaces in official merchant sites ( such as Amazon ) the strange ' Your Deals , Mr Bond ' ( Not to be mixed with John Gardner's ' No Deals , Mr Bond ' novel ) - which even appears to be included into Wikipedia datas research pool .
A collection of bridge-related short stories published by B.T Batsford .
The title piece is a short story featuring James Bond, who is assigned by M to defeat a villain named Saladin who is threatening to explode nuclear bombs in several major cities ( with a plot like this , you could be forgiven for thinking said book is written by a tenth grade pupil...).