How Sir Michael Caine attended the birth of the Goldfinger theme song...And wishes he hadn't ! 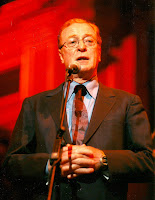 I will always remember the hilarious Michael Caine introduction of the memorable 1998 Royal Albert Hall John Barry Concert in London ...

The acclaimed actor told a packed house about how , broken and houseless , he came to ask for shelter at his friend's doorstep in 1964 ...The night the James Bond composer precisely rattled his brain to try to find a correct tune for the third James Bond movie ...

In his typical no-nonsense fashion, the actor told the audience ( of which I was a fortunate member ) that he desperatly tried to find some sleep while his musician friend kept on banging on his piano next door , and ended his little speech , having the audience rolling with laughter , with those immortal words :

" In the early morning , I tried to make a good face - fortunately we actors always have some make-up with us , no , not that kind of make-up ! - and then ask John what was the tune he had been working on the whole damn night .
- It's called ...Goldfinger , a harassed and obviously gutted composer simply answered before collapsing to bed .
So that was it . I've been fortunate enough to litteraly attend to the birth of the greatest James Bond song ever ! "