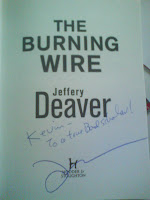 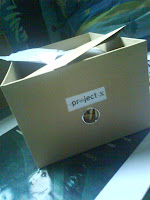 Back in Bond Age !

Wonderful surprise in my mail box today : a big package ( so big it completely fullfilled my box ) was waiting for me .
The sender ?
Hodder & Stoughton - London.
After unwrapping the big brown box ( posted from...Switzerland ) , I feverishly opened it , to discover various pieces of interest inside .
- A signed harcover copy of Jeffery Deaver's The Burning Wire .
- A copy of Jeffery Deaver's Garden of Beast .
- An enveloppe , marked ' Private & confidential ' , with an instruction letter and a personnalized encoded badge ( ' for future development ' ) .
- A copy of Ian Fleming's From Russia With Love ( not signed . Damnit ) .
- A cd with a video intervention of Mr Deaver himself ( a real - and completely unexpected - threat ) .
Now, that's what I call intelligent marketing .
Makes you feel like Jim Phelps at the beginning of a new mission of the I.M.F ( fortunately nothing catched fire after I read the instruction message ) .
Almost nothing revealed on Mr Deaver's future blockbuster ( correction...Nothing at all , to be honest ! ) , but having definitly the journalist hooked for more !
Congratulations to all parties involved - and of course to Mr Jeffery Deaver for kindly autographing me a copy of his book and taking time to record that video message , even if I couldn't attend last month's London event .

It's common knowledge amongst movie-goers that next year will be the Tintin year with the release of the Steven Spielberg produced first movie , directed by unknown New Zealand filmmaker Peter Jackson...

Thought it'd be interesting to go back to the first live action movie inspired by the adventures of Tintin , and pinpoint some interesting trivias with another world wide known hero...

Shooting of the movie ( titled ' Tintin & the Golden Fleece ' ) began on May the 2cd of 1961 ( at the times , a certain Ian Fleming was still trying to get 007 on the screen via a movie tentatively called ' Thunderball ' ) .

Locations chosen for that first adventure were : Istanbul , Macedonia ( proemently featuring the Meteora area ) , Greece and Yugoslavia...
Which will then be used again by Eon production less than 3 years later for their second James Bond film, From Russia With Love .

Amazingly , the Meteora location is just used for the scenery ...While there is indeed a 'climbing' sequence of some sort in the Tintin adventure ,when the reporter had to escape a huge tower in Istanbul by slowly descending along its wall using a tigh rope (see pic ) .
Further on in the story Tintin & Captain Haddock have to meet a priest up in the San Stefano monastery , and casually climb up using a small track along the moutain ...Which has obviously disappeared in 1981 when James Bond and his party decided to pay a visit to the very same area in For Your Eyes Only .
( See caption of the Tintin movie when they passed by the house where the winch is located in the John Glen flick .)

Interestingly , although the Eon team had to make do with irrate protesting monks during their shooting of the For Your Eyes Only final sequence, the monastery had welcome Tintin with open arms...

Terence Young himself used to say that the James Bond movies were really only Tintin adventures for grown ups .
The man who created the screen 007 obviously knew what he was talking about ...
Publié par Kevin Collette 2 commentaires: