Project One in Approach ...

2015 will count amongst the James Bond Extra year .
Not only will the afficionados get a 24th film , courtsey of Eon, MGM & Sony ,
But the Ian Fleming estate also teased fans last year with the announcement of a new James Bond novel due to be penned by Alex Ryder writer , M. Anthony Horrowitz ..


The novel should be available in bookstores world wide by next september ( beating Spectre release's date by a few weeks ... ) .

On the French edition front , this one will benefit from a unique launch .
According to some sources , it's not merely one but two different French Publishing houses that will simultaneously release the new book ...

Representants of those respectable French publishers were invited to attend a lecture by Anthony Horrowitz himself in London a few weeks back .

At the time , ( still quoting a reliable source ) , the final title of the novel wasn't revealed .
It is known however that the book is inspired by a synopsis devised by Fleming himself in the fifties - when he was approached by some TV producers willing to translate the James Bond adventures on screen for the very first time .

A very tantalazing springboard for Mr Horrowitz to jump onto .  And undoubtly another wealthy addition to the Bond litterary cannon to come ... 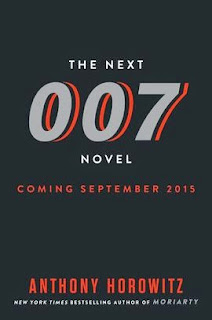