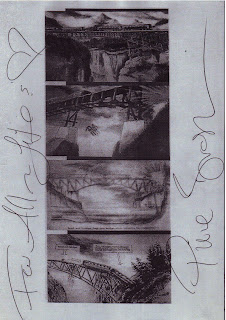 Back in 1995 , I supplied some colleagues of Canal +'s Journal du Cinéma some 007 merchandise to be presented to Pierce Brosnan during a Live TV interview ( notably a big 1965 German manufactured toy Aston Martin - the one operated with batteries -, which Pierce failed to correctly activated : he pushed buttons randomly until the ejector seat suddenly popped out and launched its passenger ...Much to the visible surprise of the Star , whose reaction wasn't faked ! )
To thank me for my participation , the TV crew then asked him to sign me that storyboard of an unused sequence of the movie ( was it ever shot ? I wonder ... )

Document property of Media Bis 1995 - Not to be reproduced .
Publié par Kevin Collette