So you're fifty eh ? Soon reaching retirement age then ... 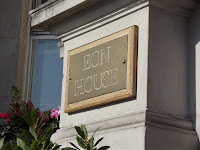 As some of you may already know , was in London last week to check up various things ;

First thing I noticed while in the Tube were large adds for a new book dedicated to Ian Fleming's Elite Commando .
Checked later about that one at Harrington's , whose owner clearly advised me against buying said tome . Oh well , maybe for completists only then ?

Next on the agenda was of course a visit to Eon's offices - with two purposes .

First , trying to obtain the date of the Pinewood Studios Bond23 Production launch International Press conference ( rumoured to be happening next month ) .
Sorry to report that despite turning my old French charm full towards the lovely Blonde receptionist , I couldn't get a clear answer ( " If there were such a conference already planned , don't you think I'll be the first to know ? " kindly answered me the innocent creature ) .

Second : getting a lil' bit more informations about next year Beaulieu ' Bond in Motion ' unique exhibition .
Been a little bit more successful on that one , getting a teaser poster and various infos .
Exhibition will be opening January 2012 at the National Motor Museum in Beaulieu .
Teaser I'm reproducing below . Very classy . Very Bond . Very Vintage . Love it .
As a bonus , also got printed on that one the official 50th Anniversary logo , which I'm ashamed to say looks like the work of a 12 years old kid using PaintShop Pro for the very first time . Come on guys : don't you have better designers at Eon's who could just devise something , eerr , a bit more imaginative than this oh-so Classic Gunbarrel motive ?
It's the 50th Anniversary damnit , not just a tea Party ...
Note to future thiefs : I have colorized said logo - which was originally only in Black & White .

That was about all the news I learnt while being on British soil those last days .
Oh , and I saw a beautiful vintage DBS Aston Martin parked in Portobello Road too .
Unfortunately she was painted metallic blue ( mind you : a Bronze one would have do too ... ) .
Publié par Kevin Collette 1 commentaire:

Welcome to the home of James Bond Ancestors ? 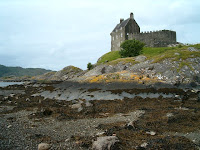 A Scottish castle is to play a starring role in the new James Bond film with main star Daniel Craig visiting Argyll to play the famous 007 special agent.

Scenes of the still unnamed “B23” ( although recent rumours have it already christened ' Skyfall ' ) , the 23rd Bond film to be made, will be filmed at Duntrune Castle on Poltalloch Estate near Lochgilphead in mid-Argyll.

The local business community has welcomed what will be a major boost to the economy.
According to local sources , shooting will depict an assault against the venerable mansion , and is supposed to take place by the ending of the film .
Scenery will have to be covered by fake snow - a decision which has been already notified to the concerned inhabitants .

James Bond fans will remember Scotland was already used as a 007 location in several movies - starting with the infamous McGregor Castle of Casino Royale ( the 1967 version ) , then appearing as a local MI6 undercover HQ in Twine ( 1999 ).Incidentally Terence Young also shot most of the Helicopter chase in FRWL ( 1963 ) in Scotland too ( passing it for Yugoslavia ) .
007 Afficionados will also remember the ending of the 1990 TV movie ' Ian Fleming Spymaker ' - which depicted an assault on a fortified castle , sequence was filmed in... Scotland .

Turkey and China are among the other locations, and Oscar-winning actress Dame Judi Dench, who took part in a fundraiser at Inveraray Castle in Argyll on Saturday night, will return in her role as “M”.

Director Sam Mendes has already visited Duntrune, famous for being the oldest constantly inhabited castle in Scotland, and filming is due to take place in February 2012.

So now you know where to spend your next year Winter holidays ...
Publié par Kevin Collette Aucun commentaire: