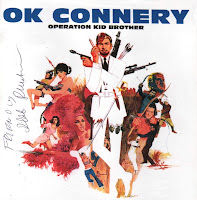 That's one of the great mystery of life : why the heck did Loïs Maxwell , Bernard Lee and , yes , the rather acting-gifted Neil Connery accepted to sign and appear in ' Operation Kid Brother ' ( besides ...Money ) ???
That's precisely the question I asked Miss Maxwell when finally meeting her in 1995 . " Oh Lord , so you do know about that ! " she exclaimed " we all thought then it would pass under the radar ... You see , Bernard and I were a bit...Fed up with Cubby paying us peanuts for the Bond series , so we went to Italy and did that movie . Sean's brother , Neil , was the star , but he wasn't an actor and had a terrible time ..." That was more or less confirmed by director of said movie , Alberto De Martino , whom I had invited at the Valenciennes Film Festival in 2006 for the Italian Genre Hommage section : " Neil was under constant pressure from his brother Sean, who kept urging him not to do the movie , fearing it would damage his own image . I think we also had to deal with Eon's lawyers at one point ...Surprisingly , the film finally did very well at the Italian B.O though ..."
Let's be honest : for the sheer fun of it , every true James Bond Fan must see ' Operation Kid Brother ' . Despite Neil Connery's , errrrr , performance , the film makes up with the supporting cast ( besides Miss Mawxell and Bernard Lee , film reunited Daniela Bianchi , Anthony Dawson & Adolpho Celi ) , the scenery ...and the sheer nonsense of the story ( having a dentist becoming a secret agent to replace his missing 00 brother...Better than Austin Powers indeed ! ).
Oh , and the catchy theme song by Ennio Morricone & Bruno Nicolai will have you humming all day long ( there's also an Italian lyrics version ) ...