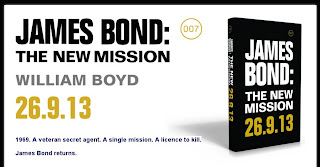 The new James Bond continuation novel by international bestseller William Boyd will be published on Thursday 26 September 2013, it is announced today. The book, as yet untitled, is one of the most eagerly anticipated publications of the year and will be published in the UK by Jonathan Cape – Ian Fleming’s original publisher and an imprint of Vintage Publishing.

The build-up begins with the launch of a website – www.jamesbondthenewmission.co.uk – dedicated to the new book, where fans can register to hear the latest news about the book as it’s released. The publication date is revealed on the same day that Skyfall is released on DVD in the UK.

The name and plot of the book remain a closely guarded secret, but it is confirmed that the story will take place in 1969, featuring a slightly older 007 at the age of 45. Boyd’s book will make a return to ‘classic Bond’, as Sebastian Faulks did with Devil May Care in 2008.

The new book will be published at the same time internationally, with HarperCollins publishing in Canada and the U.S.

2013 is an exciting year for Bond publishing, as 13 April marks the 60th anniversary of Ian Fleming’s first Bond novel, Casino Royale. To celebrate, Random House will be releasing new editions of Fleming’s non-fiction books Thrilling Cities and The Diamond Smugglers in the UK on this date.
Publié par Kevin Collette Aucun commentaire: