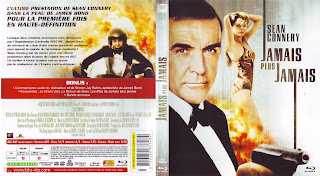 After the 2011 USA DvD release of that ' other ' Bond , Fox Video & MGM joined forces to offer a Blu-ray version for the French market . Hooray .

Every decent James Bond Fan in the world is aware of the peculiar background story concerning this movie .

Not part of the official Eon cannon , and thus not including all the usual gimmick ( opening gunbarrel and all ) , the film was launched at Summer 83 opposite ' the Bond of the moment ' , Octopussy .

It succeeded at the B.O almost according to plan ( the Roger Moore entry having the upper hand , but just slightly ) , and fuelled Kevin McClory with enough confidence to keep announcing in the Trade medias the iminent production of other Thunderball-based movies in the next decades ( none of them , including an animated version of the story ) never materialised , as we all know .

As a regular 007 movie , the film still missed some crucial elements . A sharper Peter Hunt / John Glenn type of editing , a shorter version ( 15 mm could be dropped from the final print without problem ) , a better soundtrack ( don't get me started on that , please … ) .

But 30 years later , it's interesting to note that many of the foolish ideas of the NSNA screenwriters have then been mysteriously adapted by the Eon franchise in the course of their own recent movies .

In Skyfall, for example , we see a beaten up , tired ( and slightly older ) James Bond trying to pass the physical tests to be reintegrated into active duty ( which is precisely what Bond does at the very beginning of NSNA - at the request of the new M ) .

And the ' Evil Queen of Numbers ' nickname of M in Goldeneye is a direct wink towards Bernard Fox' s own ' interpretation of M, infatuated with stats and numbers  …

So what of this Blu ray edition ?

The three documentaries already present on the 2011 US DvD version have been added , and they formed a truly great bonus of their own . Candid interviews with the crew & cast reveal the tortuous way the film production suffered , and the basic day-by-day struggle to simply be allowed to shoot a scene according to the peculiar legit status granted to Kevin McClory .

Of course , having Sir Sean Connery 's own recollection of the affair would have been the cherry on the cake but nonetheless those three mini doc ( approximatively ten minutes long each ) are really top of the state .

And would be sufficient enough for any decent Film fan to buy that disc – James Bond fan or not .

William Boyd, whose James Bond continuation novel is set to be one of this year’s publishing highlights, has today announced that his book will be called Solo.

The announcement came on the opening day of The London Book Fair, where Boyd is Author of the Day.

He explained his choice of title:

‘Sometimes less is more. For me as a novelist the simple beauty of Solo as the title of the next James Bond novel is that this short four-letter word is particularly and strikingly apt for the novel I have written. In my novel, events conspire to make Bond go off on a self-appointed mission of his own, unannounced and without any authorization - and he’s fully prepared to take the consequences of his audacity.
The journey Bond goes on takes in three continents – with the main focus honing in on Africa. It’s what happens to Bond in Africa that generates his urge to “go solo” and take matters into his own hands in the USA.
Thus far and no further, at this stage…’

He continues: ‘Titles are very important to me and as soon as I wrote down Solo on a sheet of paper I saw its potential. Not only did it fit the theme of the novel perfectly, it’s also a great punchy word, instantly and internationally comprehensible, graphically alluring and, as an extra bonus, it’s strangely Bondian in the sense that we might be subliminally aware of the “00” of “007” lurking just behind those juxtaposed O’s of SOLO…’

Very little else has been revealed about the book at this stage, other than that it will feature a veteran secret agent, with Bond aged 45. It will be published on 26 September in the UK by Fleming’s original publisher, Jonathan Cape, an imprint of Vintage Publishing, part of The Random House Group, in hardback, ebook and audio editions. HarperCollins will publish the book in Canada and the U.S. on 8 October.

Except ... Bond fans around the world will certainly remember ' Solo ' was the original title of Ian Fleming's venture into Television production . And that , due to legal pressure from mrs Broccoli & Saltzman - not quite keen on having the name of a minor character from the novel ( and then upcoming film ) Goldfinger used as the title of a new TV series , resulted in the series original title having to be hastily changed before actual U.S airing , to become the less subversive ' The Man From U.N.C.L.E ' ...

‘We are delighted to be announcing Solo as the title for the new James Bond novel on the day on which William Boyd is celebrated as Author of the Day at London Book Fair. The few of us with the good fortune to have read Solo can testify that Will has written an absolutely brilliant book and we look forward with mounting excitement to a huge worldwide publishing event on September 26th. The timing of the announcement is particularly apt as we mark the 60th anniversary of Jonathan Cape’s first publication of Ian Fleming’s Casino Royale.’

Published on 13 April 1953 by Jonathan Cape, Casino Royale introduced James Bond, Special Agent 007, to the world. The first print run of 4,728 copies sold out within a month. Following this initial success, Fleming went on to publish a Bond title every year until his death in 1964.

It is in Casino Royale where 007 first utters the immortal line ‘Bond - James Bond’ and where Bond first reveals his recipe for the famous martini cocktail, christened the ‘Vesper’ after the first Bond girl, Vesper Lynd. The artwork for the original cover was designed by Fleming himself, decorated with a heart motif to reflect a playing card.

The first American pocket edition , apparently unsure of the original title , decided to go for a rather Mickey Spillane type of title ' You Asked for it ' .

In 2012, Casino Royale returned to its original publisher, Jonathan Cape, with a Vintage Classics edition featuring a new cover design inspired by the original, and an introduction by Alan Judd. Vintage also publish the rest of the James Bond collection and Fleming’s two non-fiction books.

To this day, Fleming’s Bond novels have sold over 60 million copies and have inspired a hugely successful film franchise.
Eon Production’s 2006 film adaptation of Casino Royale with Daniel Craig is one of the highest-grossing Bond films in history.

Later this year a new James Bond novel, written by bestselling author William Boyd, will be published by Jonathan Cape. The book, the title of which is yet to be revealed, will be published in the UK on 26 September 2013: www.jamesbondthenewmission.co.uk.