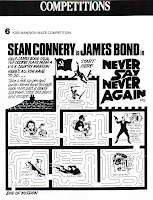 As I have already written in the very first entry of that Blog , I've been peripherally involved into the French promotion of ' that film ' in 1983 .
You know : the ' Canada Dry Bond ' , which looks like a Bond film, reads like a Bond film , even stars some of the best Bond comedians ...But ultimately fails to even mimic the indomitable Eon one and only recipe to success...

Anyway , some really curious things must have passed through the heads of the Warner Publicity execs desperatly trying to outdo the competition , such as those games designed primary for a target audience between 6 and 8 ( I cannot honestly see any adult doing those ! ) and which should have been inserted into various medias ( newspapers,etc.)...

Those demented NSNA themed mind games ( ? ) were part of the UK official Exhibitors Campaign book , released by Warner around July 83...