Growing up with James Bond ...

( Warning : this is a semi autobiographical piece , where the writer fondly looks back at some of his 007 related memories ) . Kind of trip to Nostalgia lane . 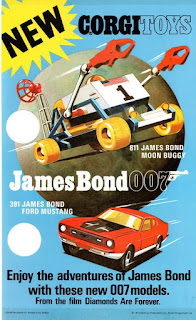 And to an 8 years old kid , this was a universe quite different from the usual Disney pictures my parents usually took me to see at the cinema .
A couple of days later , I managed to cajole my godfather to buy me two Corgis models issued from the movie , the awesome Moonbuggy – which I still have and still functionning – and the Aston Martin DB5 ( which , unfortunately , has suffered much more from being too often played with … ) .

Anyway , two years later Lord Brett Sinclair suddenly became James Bond .
I was then much more aware of the ongoing saga .
And started to read the original Fleming novels . The French movie tie-in edition of ' Vivre et Laisser Mourir ' had the superb Robert McGinnis film poster on its cover - which was the main reason why I bought the book ( to be dreadfully honest , I was disgusted not to find ANY direct relation with the movie bearing the same title , apart from some character's names . That was my first lesson in movie making : never trust a film poster claiming story is inspired by a precise book ! ) . 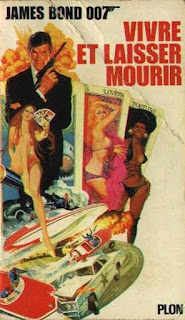 My interest in Bond then took two directions . First , following all the news appearing in magazines related to the shooting / release of a new movie and second , discovering all the original novels written by Ian Fleming ( and then trying to imagine what could have been done with a completely faifhfull adaptation of any of his novellist work . ) .

As fate would have it , I was then living in the small town of Vence , nearby Nice , on the French Riviera .
And the then current actor portraying 007 on the screen at that time ( the ever amiable Sir Roger Moore ) had a villa less than 15kms from my own home . Little did I knew then ( damnit ) .

When I decided to publish my very first own movie Fanzine in 80', it was then natural to have 007 on the cover of the very first issue . The Curse of Journalism had made another victim .
I then followed a Journalistic Course at la Sorbonne – and finally obtained a Master in Journalism & Communication in 90' .
A decision which was ( in all modestly ) largely inspired to try to follow Ian Fleming footsteps .
I figured out that his life as a Globe-trotter was one which could be rather interesting , visiting new countries , making friends everywhere , acting like an irresitible playboy , being his own Boss . That sort of things .
Hell yeah , Journalism was some kind of dream job indeed .

I had started writing film reviews by then , attending Press screenings , meeting actors & directors for promo interviews , etc, etc .
But always a Bond fan, I was still a member of several 007 Fan-Clubs around the world – best of them being without doubt the James Bond ( British ) Fan-Club .
Under the formidable input of its Président , members had the chance to visit the mythical Pinewood Studios , attend conferences with cast & crew from the movies , etc.,etc …

I even used one of those Convention ' open day ' in october 92 to film part of my first James Bond TV documentary there , ' Les 30 Ans de James Bond ' ( who knows , it may be on YouTube these days ) . I was still a trainee in the SFP ( French national TV Production company ) then, and managed to convince them to let me film there a 30 minutes doc – which was produced by Canal + Philippe Gildas company .
Oh and I got to interview Terence Young himself – in one of his very last TV appearances – for that documentary too ... 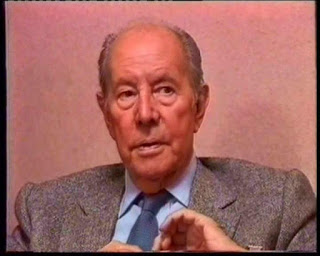 Over the years , I met many people in the movie business  , made a few friends too and continue to closely follow each new James Bond adventures ( be it on celluloïd or paper form ) .

I interviewed many of the key production members too ( Cubby Broccoli , Michael G.Wilson ,Guy Hamilton, etc. ) , and have always been impressed by their own modesty .

My interest never weakened through the years .
For me , quite simply , the Bond productions were – ARE – what Europe can offer as Best in terms of movie production and artistic value .
Their creative teams are truly international , their casts dazzle for each new movie . They trust the very same persons to work with them from film to film .
There's definitly some kind of ' Family business ' warm feeling when you have the chance to be introduced into the Eon house …

So I've ' grown up with James Bond ' - sort of .
And have been lucky enough to earn my living doing a job which was directly inspired by the very creator of agent 007 ( I often wonder what Fleming would have thought of our current ' Media frenzy ' times , though … )

And I'm not the only one , far from it .
Many current film directors have been inspired by the Bond saga .
Some famous prolific 007 screenwriters have also started their litterary career producing some James Bond inspired fanzine in their teens … 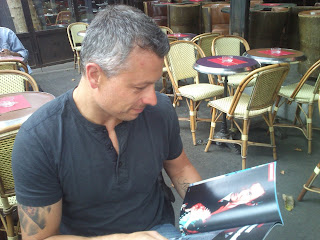 I was having lunch the other day in Paris with a friend who had been lucky enough to be picked up as Spectre Stunt arranger in the upcoming movie .
We're roughly about the same age .
First unit Shooting had finished some weeks ago , but he still had that broad grin when talking about the movie , and still did not quite realized he is now part of the Bond family . It was a dream come true ( his words ) … Lucky guy .

Maybe one day , they'll need a French writer to join their ranks ?
I should send pronto boxes of Chocolate to Barbara & Michael ... 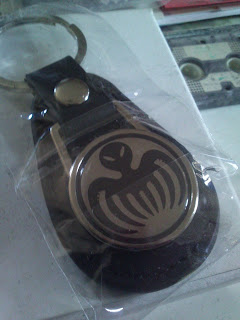 As I'm about to embark to my 6 hours journey via trains to reach Interlaken , I reflected that some films – like wines – never age . Or rather age rather well .
That's precisely the case of the 6th instalment of the Eon produced James Bond film series .
One of the most faithfull entry to any of the adaptations of  Fleming's oeuvre since 1962 ...
One starring a completely unknown ( supposedly ) actor …
One the media always considered as some sort of ' semi failure ' ( which it is definitly not – not even financially speaking ) .
And one I was fortunate enough to still discover in a glorious 35mm print in Paris in 1980 , in a Cinema which was soon to be disbanded ( as I quickly befriended its owner , I got the chance to get my hands on all the Promo material of the movies shown there … )

Anyway , back to Switzerland .
Finally arriving at Interlaken West ( there are two stations in town . I took the wrong one last time , two years ago , but wouldn't do the same mistake twice ! ) , I was welcome at the Carlton Europa Hotel by its friendly manager who had casually a … Suite reserved for me !
I cannot thank enough the generosity ( and superb services ) offered by the whole staff & its Director .

It was then around 3 :00 PM and I was expected at 4 at the Cable Car station of Stechelberg , to then reach Murren, get another one to Berg – and finally reaching the Schilthorn – Piz Gloria .
True to my unique sense of orientation , I straightfully … Missed the first Cable-Car station , and had to take a Mountain train to eventually reach Murren .
Where I had the good fortune to stumble on a BBC TV crew , chaperonned by a delightful lady from a UK based Public relation agency .
They were on their way to Piz Gloria to film a short subject on writer Mark Mason and his ' The Bluffer's Guide to Bond ' book .
We started chatting like a bunch of mad school boys at once , and I got my moment of fame when revealing official Continuation writer Raymond Benson had turned me into a Fiction character in his own 007 novel ' Never Dream of Dying ' … 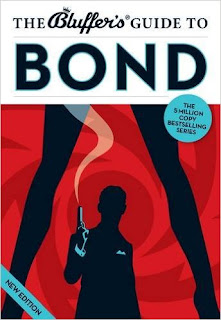 About three ( or four ) pints later , we finally decided to try to catch the cable-car to Berg and enjoy the upcoming Party .

We arrived just in time at the Schilthorn to attend good ole' George Lazenby's  Chopper touch-down in front of frenzied cameramen & journalists ...
Funny thing when you do attend a James Bond event these days – be it ANYWHERE in the world , you invariably stumble on some friendly faces .

That was the case with me being spotted at once by French Club James Bond President ( and friend ) Luc Leclech , who amiably told me Miss Catherine Schell was in attendance , and nicely offered to introduce me to the lady .
I was thrilled .
Not only did I rightly remember her as one of Blofeld's Angel of Death , but first – and foremost – as the shape-shifter alien Maya in the second season of ' Space 1999 ' .

Miss Schell wasn't obviously expecting such fervor amongst dozens of fans amassed to greet her , and she signed autographs to any lucky person bold enough to ask her one .
I had then the privilege to interview her ( in the Piz Gloria souvenir shop – a deadly place for any OHMSS fan ) , and learnt quite a few interesting titbits regarding her films & Tv career .
We could have kept on talking for the rest of the night , if she hadn't been amiably called back to perform her Bond duties during the evening …

We then proceeded to discover the new attraction, the 007 Walk of fame , consisting of a little ' promenade ' on the mountain , admiring various spots where erected panels inform the valiant tourist of various biographical details regarding some of the OHMSS cast & crew members ...

Dinner time approaching , everybody tried to find his reserved seat .

M. Christoph Egger ( whom I profoundly thank for inviting me ) had only given me a mysterious number ( «  46 » , not even close to Maxell Smart's one !   ) earlier in the day , and it was then up to the lucky winner to find the matching table .

Fortunately for me , my Dining companions were all very nice people ( Morten Steingrimsen , Sebastien Coquelle , Michael Hackl ( 007 Collector ) , etc. , etc … Apologies for all the persons I may have omitted to quote here .

Dinner was fine , ponctuated by laughters here and there .
A drawn-out competition was even provided to us die hard 007 nuts ( To my amazement , I received back in Paris an email informing me I had indeed … Won a Prize . A ParaGliding experience . Some people are clearly doing their best trying to kill me in a most imaginative way there … ) .

Between la poire et le Fromage , as we said in French , we were then treated to a formidable Firework ( the following day being a National historical Day in Switzerland - their own 4th of July if you want , I suspect the Schilthorn organizers to have use the date accordingly ) - which superbly closed that once-in-a-lifetime day . 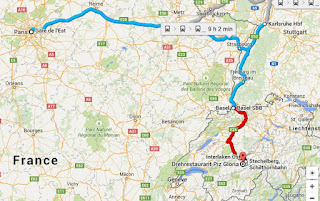 ( Well, some distinguised guests decided to stay a bit longer – as there was even some Baccarat tables provided ) – but , being stationned at Interlaken, roughly 20 kms from Murren, I considered myself fortunate enough to be ' carried away ' by two amiable fellow countrymen who had their own car , and kindly whisked me back to my hotel and my Suite ...

The author would like to thank the Paris Swiss Tourism office for its useful advices .

M. Christoph Egger – CEO of the Schiltorn
The Carlton Europa staff and manager