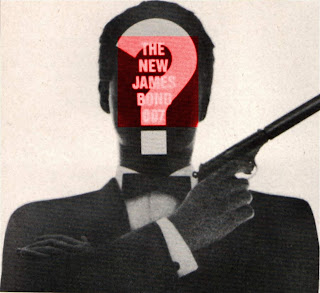 “It’s a slight problem if we have to get a new Bond ” Cubby Broccoli told me. “But there’s always somebody lurking out there that would be a good Bond. Or a bad ’un!” Right! Althougfh it was inconceivable that two producers who chose as correctly as Connery could have made the enormous error as Lazenby. He wasn’t the only guy in the frame... Roger Moore was set until shooting clashed with his Persuaders schedule. And so a new search began for - what else - “a young Connery.” Ian Ogilivy was approached (he became Roger's Saint successor in 1978). Also seen: Michael Billington (soon enough, an Eon house pet) and a certain Timothy Peter Dalton. Cubby was also was keen on Jeremy Brett, who became the ultimate Sherlock Holmes, 1984-94). Ironically, Ian Fleming’s own sketch of Bond greatly resembled Holmes. Broccoli’s most surprising idea was... Oliver Reed. An ex-Hammer Films werewolf (he once asked me if he should move to France, “where they like ugly men - look at Belmondo!”), Reed had too many problems: drinking, brawling, weight, etc.. Cubby decided that the need “to destroy his image and re-mould him” was too great. Two telly-Americans were tested - Adam Batman West, bordering on the plump, and Roy Thinnes from The Invaders, bordering on the boring. And a third ran: Tom Selleck. “I was asked to screentest but I turned it down. I’m sure that being between Roger and Sean wouldn’t be a good career move.” Finally, from an alleged 413 contenders, George Lazenby, beat the other finalists: Robert Campbell, Anthony Rogers, Hans De Vries (who immediately joined the Cubby’s dream team of Connery/Bardot in Shalako) and John Richardson, husband of double Bond Girl, Martine Beswick Soon as he became Bond, all his 32 minutes of Lazenby’s 1965 screen debut as “British Spy” suddenly disappeared from Spain’s Marc Mato, agent S.077/Espionage in Tangiers. “Cubby Broccoli will tell you that I was a failure and difficult to work with,” said Lazenby later “Unfortunately, he told a lot of people that and it meant that it was impossible to get employment.” What Cubby actually said was: “You’re only a star when the public says so.” Even after a further 59 roles in 34 years, the public never said that about George.