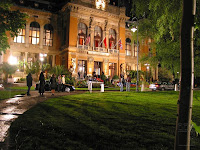 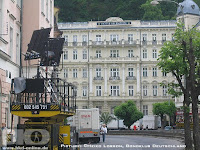 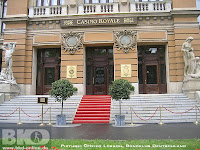 In May 2006 a group of Members of the german James Bond Fan-club "Bondklub Deutschland" travelled for one Day to Karlovy Vary. At this time the First Unit of "Casino Royale" was in the City for filming Scenes around the Grand Hotel Pupp (alias Hotel Splendide in the Film) and the "Kaiserbad" (an old Bath (Cesars Bath), used in the Film as the Casino Royale).
The most interesting thing was, that everything was open, so we could go into the Hotel. We have been in the Foyer, have seen the Lift,  have been inside in an Resting Room and in the Restaurant of the Hotel We have also seen  the Area, where the Dinner was served between 007 and Vesper Lynd.

There was no fence around the Hotel (as f.e. in Bregenz at the filming of QofS). So we could see in the Restaurant Daniel Craig drinking Coffee (after Jogging) , Eva Green outside the Hotel walking with her dog, Lindy Hemming with her Assistant in the City and Martin Campbell walking between Hotel and the Kaiserbad.

When we arrived in Karlovy Vary we have been first to the Mühlbrunnenkolonade, which was seen in CR as the Train Station. After  a nice and long walk through the old City we have been to the Grand Hotel Pupp and have been surprised, that there was no Security or a Fence around the Hotel against Visitors or Fans. Interesting is that in the Film the driving from the Train Station to the Hotel is in Reality the vice versa direction, as they would drive from the Hotel to the Mühlbrunnenkolonaden.

And it was funny, that we heard from other Tourists that they thought the Hotel was really renamed ' Hotel Splendide ' . It was great to see that really each plate with the Name of the Hotel, or the Restaurant was changed.
First we went into the Restaurant of the Hotel, which is also usable for guests who don`t stay in the Hotel.
We had a drink and met other friends. We were finally a group of 10 Persons. Then we saw a staircaise into the Hotel and we went into . There was a great Restroom, where we could have also a few drinks.
From there we had a view to the table, where 007 and Vesper had Dinner after the Victory over Le Chiffre at the Pokergame.
We had also a short glimpse of Michael G. Wilson and Barbara Broccoli, who rushed through the Restroom.
Then we went to the Foyer and we saw the lift, which is different to the lift in the Film.

When we went back to the Restaurant, we saw Daniel Craig drinking a Cup of Coffee in a small corner of the Restaurant.
A Member of our group asked him for a Photograph, but Daniel said no, because he didn`t wanted to be photographed in his Jogging Clothes.

Afterwards we walked along the Car Park of the Hotel, which was closed for Public Use and full of Security people, because there was standing the Aston Martin and the Bentley (used as the Hotel Transfer).
The we made a walk to the Kaiserbad, which was decorated as Casino Royale and prepared for a filming in the Evening. Later we saw a group of Extras, which filmed later in the Night a scene inside the Kaiserbad.
In the Evening, before we left Karlovy Vary, we saw the Preparation of the Street in Front of the Hotel. It was made wet, for filming a Night sequence as we heard (probably the Sequence when 007 follows the kidnapped Vesper and runs to his car)
It was a wonderful day ,which made great memories.

Text and pics copyrighted .
The Pictures are from Sascha Braun, Heiko Lorson (signed at the Pics) and from Alexander Stundner (not signed).
Publié par Kevin Collette