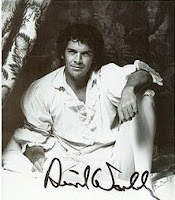 1973
This time Sean was gone. For good. (Well, never say never...)
To take over Live And Let Die, Hollywood wanted McQueen, Newman or Redford. (Honest!) Pat McGoohan still refused.
Cubby checked Michael McStay, Simon Oates and John Ronane while waiting for Roger Mortuary to be free.
When he wasn’t... well, I ran into David Warbeck promoting his awful Russ Meyer flick, Black Snake ( NdA : still worth seeing ...But not for Warbeck ! ) .
A New Zealander of Scots descent, David was a London schoolteacher between acting gigs.
He had great news for me.
If Roger wasn’t free of The Persuaders, it would be Bond, David Bond. “That’s what they tell me.”
We did an interview, to be released as soon as his news became official.
It didn’t.
On holiday in Menton, I saw a British paper: THE SAINT IS NEW 007. Damn!
Warbeck would be considered again (twice) and became (a) totally ignored by UK films and (b) a star of Roman rip-offs of Bond/Rambo/Indy, whatever action hero was hot.
He was also James Coburn’s pal in Sergio Leone’s Duck You Sucker!
In one spaghetti thriller, Warbeck actually said: “You’re muddling me with Roger Moore.”
Nice guy, nice try... but not quite.