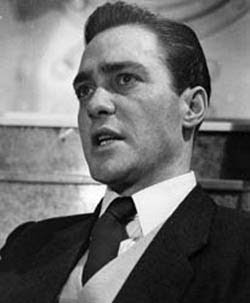 I thought I knew all the guys who’d tried to be or were considered for James Bond. From Hollywood heavy John Payne (a kind of Robert Mitchum wannabe), Trevor Howard, Peter Finch and Michael Billington to Edward Underdown, Richard Harris, John Richardson and Peter Sellers, etc, etc.
Surprise, surprise. When British movie star Richard Todd died in December 2009, obituaries in the British media revealed  that the Scots-Irish actor had been invited to add 007 to his collection of British heroes such as Wing Commander Guy Gibson, Robin  Hood and Sir Walter Raleigh. Fortunately, he was too busy. As an actor, Todd was as boring as his roles (his were squeaky clean-cut heroes, so the villains always had far more charisma)... boring as his friends (Ronald Reagan included)... and boring as his second career (dairy farmer).
NdA : not quite sure about the truth regarding what's been said in the TV obit though . Ian Fleming's James Bond first choice , really ?