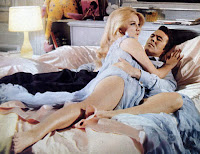 The call was so secret even the phone bell sounded muffled. “Ya wanna meet the new 007? And be first in the world to interview him?”
Sure! When, where? “Call ya soon.”
That’s how I met Terence Cooper, one of the caboodle of Bonds in the four-ringed circus of the first Casino Royale.
He’d been waiting in the SIS corridors for ten years to be 007.
“When producer Kevin McClory tried to get Bond on the screen,” he told me in Gerry’s Bar (where else?), “he had a contract with... guess who’s name on it? No, not Sean’s. Mine.
In 1957 ! Five years before Dr. No. Sean doesn’t play the part right.
Me? Just hope I get across OK without tripping over the flaming carpet.”
Very Bondian - a falling black comma of hair; sent down from Oxford for “various irregular activities” - Cooper called himself the greatest con-man. (Or second, after McClory).
He almost punched out Casino producer Charles Feldman when they met at the Pickwick Club. “Thought he was making a pass at my girlfriends.”
No, he gave Cooper a seven-year contract, rising from £250 to £1,000 a week.
“Why? I don’t know. I was always very rude to him, so he didn’t know what to make of me. But, as all the other people who treated him like that happened to have great talent, Charlie probably mistook me for being a tremendous actor.”
Charlie wuz wrong!
Tony Crawley - www.crawleyscastingcalls.com