A STYLE IS BORN 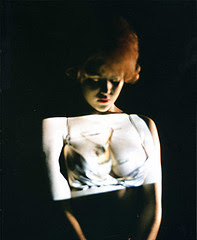 B.J. as his team called him (“for Big Jerk, I guess”) was the second of the Bond stars to die (at the absurdly young age of 45) in 1970, six years after Ian Fleming. A hard-drinking American from Newark, New Jersey, Robert Brownjohn created the style and impact of all 007 credit titles. For just a brace of Bonds... The writhing names shimmering around the undulating belly-dancer (actually, three) at the start of From Russia With Love and the projection of clips and names upon the gold-painted body of actress Maggie Nolan for Goldfinger .
B.J. was design director for the major McCann-Erickson ad agency when meeting 007’s producers via mutual friends. They made mention of a belly-dancer in one scene. Bingo! Or, indeed, in BJspeak: “Duck soup!” (Easy!) His mind went back six years to when he was teaching typography with a slide-projector. “This student came in late, walked in front of the projection beam. Immediately, the type being projected shot on to his shirt. Obviously, the shirt was not flat like the screen, so the type changed shape and size. It look great!”
Voila, Bond movie credits were born.
B.J. created more credits for Where The Spies Are, The Night of the Generals and Michael Kohlhaas - Der Rebel but never worked for Eon again.
Eon was not pleased with him daring to title a rival spy film and B.J. was not pleased with on money. “Few companies will meet my price of £5,000. Not much when I have to pay my team and hire a studio. I’m lucky if I make £1,000. In the States, Saul Bass gets £17,000 a movie.”