Bottom of the Barrel ( French / Italian style ) : Shut Up While U Speak !! 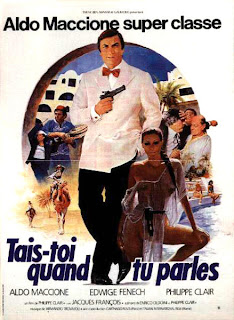 Category : to be avoided

This 1981 Franco Italian venture hasn't been released on DvD yet ( even in France ! ), so you might have trouble looking for it ( that is , if you're a real masochist , eerr I mean completist ! ) .

Film tells the story of you and me , that is the ultimate James Bond Fan whose real life is a misery and who finds escapism into the movie adventures of a certain British agent with a licence to Kill .

Trouble is : when such a basic idea gave us interesting plots like " The Man With One Red Shoe " ( US remake of French ' Le Grand Blond Avec une Chaussure Noire ' ), or even the interesting ' Operation Kid Brother ' , that Philippe Clair-directed comedy is a total mess .

Main responsible : the director itself who would make the 3 Stooges comedies pass for an Ernst Lubitsch 's masterpiece .
Really .
With an humour as subtle as a twelve tons Sherman tank , director Philippe Clair ( who appears in a cameo as a North African contact ) offers a basic ' what if ' comedy with Aldo Maccione ( Italian comic who should have stayed beyond the Alps ) trying to pass for France's greatest secret agent on a deadly mission in Tunisia .

Fact that said ( French ) agent is named...James is irrelevant of course .
Giacomo ( "James " in Italian...Wink , wink, nudge , nudge),a 007 fan whose flat is decorated with Bond Posters with his face replacing those of Connery and Moore (ahaha) is therefore mistaken for his Hero during a trip to Tunisia .

Reality and delusion clash together when the guy also got mistaken by the ' Opposition ' as a real secret agent , and who then tries to eliminate him from the surface of the Earth...

Trouble is : as the movie continuously switches between the 'real ' Giacomo who manages to stay alive by pure luck only AND the fictionous invincible version of himself ( his...Avatar . Sort of ) , one has trouble understanding what is really happening on the screen !!

On the plus side , the presence of bellissima Edwige Fenech ( whose first apparition is a casual frame-by-frame re-shot version of Ursula Andress in Dr No ) as the obligatory Female interest ( AND double agent , of course ), some nice locations and some - scarce - funny gags ( mostly directed toward Bond Fans : when Giacomo is finally recruited by the French Secret service for a deadly mission , he answers " Ah, I hope it's the Goldfinger mission and not the Moonraker one . That last one sucked ! " ) .