EXCLUSIVE REPORT 3 : “ A Jeffery Deaver novel but set in the world that Ian Fleming created. “ 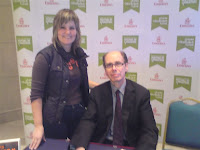 We were lucky enough to have our own very special correspondent at Dubaï being able to attend Mr Jeffery Deaver's first official Public Conference as the new James Bond thriller writer.

In the last part of her report , we'll learn more tantalising titbits about the plot of Carte Blanche...
Once again, a big " thank you " to our special correspondent for bringing us that exclusive report .

( M. Jeffery Deaver ) continues to explain that if a scene is approached in a certain way (using example of the Goldfinger book intro – bond sits reflecting at airport after killing an assassin), we start to think about the consequences of taking a human life, and our way of thinking is elevated.

When asked why he gave up working as a lawyer, Mr Deaver explained: “So many lawyers become writers because we hate practicing law.” He knew when he was very young that he wanted to write fiction, and was writing novels while doing several jobs. He shredded his first book, because he was embarrassed to read it. He was 40 years old when he was making enough money to quit working as a lawyer, and now enjoys very much going to the office in pyjamas.

He takes about one year to write a book, of which 9 months is spent on research and an extensive outline (170 pages).

Two months is spent writing the actual book (about 40 pages per day) and one month is spent editing. Carte Blanche is 99 % finished, only some editing is left to do.

When asked how much freedom he was given to write the Bond novel, he explained that they - Jeffery Deaver and Ian Fleming Publishing company - first settled on common ground, and immediately agreed to set the novel in contemporary time.

At the same time, Carte Blanche will be a Jeffery Deaver novel, written in his own style, featuring James Bond. All in all, he called it “a very enjoyable mutual project”.

On the question of who he had in mind as Bond when writing the book, he answered that he had seen most of the movies, but has the imprint in mind from the books, where Ian Fleming described Bond as resembling Hoagy Carmichael ( who was also the base of the Daily Express Comic strips adaptations of Ian Fleming's novels .NdA ) . He also stated that he was delighted to be associated with Bond, but that he had not thought beyond Carte Blanche, as he is currently busy with other books.

Finally, the last question that was permitted from the audience was to ask if the minor characters from the Bond series: M, Q, Moneypenny would be present in the book.

He explained that this would be a Jeffery Deaver novel but set in the world that Ian Fleming created. All characters will be updated to fit the time period. “I wanted to move seamlessly” he stated, and also hinted that we might see accessories that we seem familiar with, and characters will be familiar but suitably updated. The women, similar to the women Ian Fleming created, will be very strong and resourceful.

The event ( which lasted about two hours ) concluded with a rendering of “Nobody does it Better” once more sung by Celeste, and addressed to Mr. Deaver himself, after which he kindly was available for autographs on both his existing books or book inserts for Carte Blanche.