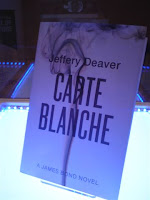 We were lucky enough to have our own very special correspondent at Dubaï being able to attend Mr Jeffery Deaver's first official Public Conference as the new James Bond thriller writer.
In the second part of her report , we'll learn tantalising titbits about the plot of Carte Blanche .
Text & Photo copyrighted Miss N.Cloet 2011 - Editing & Publishing copyright Media Bis 2011 .
Report written by Nathalie Cloet
He ( James Bond ) is carried forward into the current age, Deaver’s Bond is 30-something, born in the late 70’s, and very much follows his own conscience.
On why Bond is so influential throughout the years: “Bond is not a cardboard character hero. He has a great deal of depth, Fleming made him question a lot of things. He is a real, a flawed individual. At times he hurts, and has difficulty doing what he does.”
On how Bond has influenced his own life: Mr. Deaver admitted to being a “nerd” growing up, socially inept, and drawn to reading Tolkien, C.S. Lewis, Sherlock Holmes.
He picked up his first Fleming book at age 8 or 9, and feels that Fleming set the standard for Crime fiction for him, and that he was disappointed by other writers when reading them afterwards.
He calls himself a very plot-driven author, and thinks of himself as sick & twisted.
He works up to 10 hours a day.
He stated that it is very rare for a writer to be in his situation, where he makes a living as an author.
He uses only 10% of his ideas in actual books, and as is well-known, all of his books have 2-3 big surprise endings, including Carte Blanche.
He stated that he will never kill his protagonists, just as he will never hurt children or animals.
So, it will be quite likely that James Bond will survive this adventure. (Thank God in name of all Bondfans! ) .
Unfortunately Bond did not find time during this adventure to go for a sauna and a swim, or take a tour of the Burj Khalifa.
Mr. Deaver wants people to stay up late reading, and after having finished the book saying “That was fun”, not “I learned something”, but “I enjoyed that”.
On the subject of villains, Mr. Deaver commented: “With villains, anything goes. One can create the most sick and twisted characters. My villains echo Ian Fleming’s villains: quirky, unique, larger than life and passionate. Every character has a sense of depth.”
He explained wanting to step away from stereotypical villains (a banker for a US bank) or stereotypical henchmen ( “a guy with my hairstyle and a ponytail, a leather jacket and a goatee” ).
“We need a villain who is as smart and rugged as our hero, but more ruthless than him, so that when our hero defeats the villain, there is a resonance with the reader.”
WATCH THIS SPACE FOR NEXT MONDAY FINAL PART OF THE REPORT !
Publié par Kevin Collette