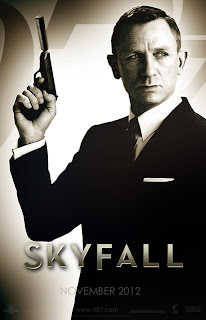 Sony Pictures teased the CinemaCon 2012 audience with an exclusive Preview screening of their 2012 lineup .

And, one of the films most eargerly awaited with the very first preview screened anywhere was of course about the upcoming 23rd official James Bond movie “Skyfall.”

The trailer started with James Bond on the roof of a London building , glancing at the city while the viewer is hearing a psychological evaluation between 007 and a Profiler .

They played a word association game, in which Bond responds with the first words coming to his mind.

On the other side of the interrogation room, M ( Dame Judi Dench ) and Mallory ( Ralph Fiennes as the Minister of Defense ? ) are seen standing behind a two-way mirror with an unidentified man. Meanwhile, the interrogator keeps asking Bond more words.
However, when the interrogator says, "Skyfall", Bond doesn't immediately reply. There's a pause . When the man repeats the same word for the second time, the 007 agent finally utters, "Done", before getting up and leaving the room.

The rest of the trailer showed the audience glimpses of action sequences , featuring mostly Daniel Craig .

Shots of helicopters zooming in , giant fireballs exploding, shots of the Shanghai nightlife, Bond standing over a long row of coffins draped with the flag of England ...

One noticeable insert was about a London subway wagon crashing through a station wall ( shades of Die Hard With a Vengeance ... ) .

The teaser ends with an ominous voice-over by 007 telling audience " someone is coming to kill us , we're going to kill them first ... " .

“Skyfall” trailer will be released soon ( possibly by early May ) . The film will be in theaters on November 9th in the US and October the 16th in Europe .