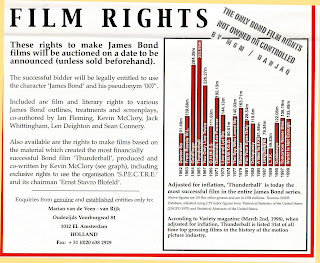 As late as year 2002, independant ( and a bit silly ) producer Kevin McClory still had the idea of launching a rival James Bond production opposed to the classic Eon series .

Since all his previous attempts failed ( excluding the so-so Never Say Never Again 1983 film ) our man decided to part with those " rights " of his he had used for years to try to convince studios he could legitimately offer the opportunity of creating exclusive versions of his ' film scripts ' ( supposedly earlier treatments of the ' Thunderball ' screenplay ).

That's why I discovered in Cannes with some astonishment on May the 16th of 2002 that full page add printed in an issue of the daily Screen International magazine during the International Film Festival ...

Note how our clever producer offers not just the rights to do a remake but a whole " James Bond outlines, treatments and screenplays co-authored by Ian Fleming , Kevin McClory, Jack Witthingham , Len Deighton & Sean Connery himself " bundle !!

No decent Producer could pass such a drooling offer , couldn't he ?

It should be pointed out no one ever heard of the mysterious Dutch ' Marian Van De Veen - Van Rijk ' either .

Was it a lawyer , some foreigh friend of McClory or just someone naive enough to think there was indeed some money to make out from this deal ???

For more information about that affair, read the excellent Robert Sellers book ' The Battle for Bond ' .
Publié par Kevin Collette